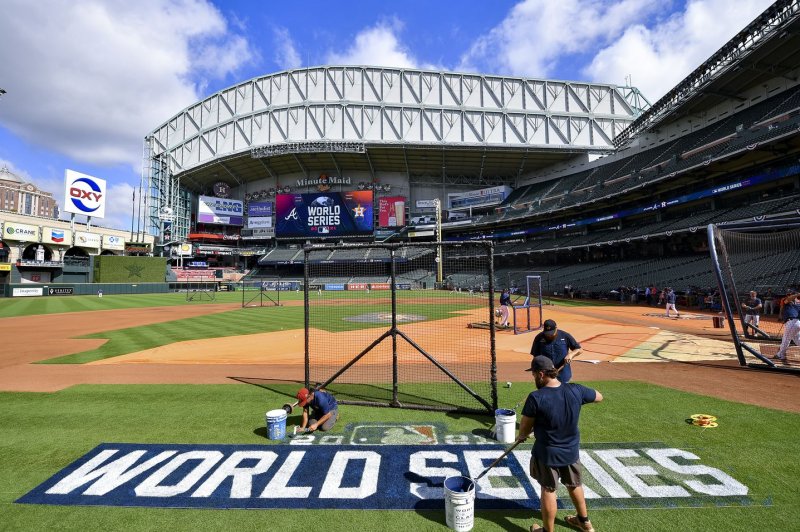 Grounds crew paint the field of Minute Maid Park for Game 1 of the 2021 World Series on Monday in Houston. Photo by Maria Lysaker/UPI | License Photo

Oct. 26 (UPI) — The Houston Astros will host the Atlanta Braves in Game 1 of the 2021 World Series on Tuesday at Minute Maid Park. The Astros, a preseason title favorite, are favored to beat the Braves in the best-of-seven series.

“I think this is because of what we overcame this year,” first baseman Freddie Freeman told reporters Saturday when asked about how the Braves reached the World Series. “We’ve had 40-foot potholes we’ve hit, humongous speedbumps.

“Everything you could possibly see in the road, we hit it. We still somehow overcame all that. That’s what this team has. Anything we got thrown at us, we overcame it.”

The Astros (95-67) posted a better regular-season record than the Braves (88-73) to secure home-field advantage. The first two games are in Houston. Game 3, Game 4 and a potential Game 5 are in Atlanta. The final two games, if necessary, will be in Houston.

The Astros are making their third World Series appearance in five years. They won the first title in franchise history in 2017, but the championship is clouded in controversy because of an illegal sign-stealing scheme the team used in 2017 and 2018.

“We really want to win the World Series to demonstrate that we are just a great team,” Astros designated hitter Yordan Alvarez told reporters Sunday. “That’s what wins the championship. The talent that we have on this club is what’s going to win us a championship.”

The Braves have three World Series titles, but haven’t won a championship since 1995. They lost in five of their last six World Series appearances.

The Braves dealt with catastrophic in-season injuries to key players in the regular season, but snatched momentum just in time for the postseason. Star outfielder Ronaldo Acuna Jr., a preseason MVP candidate, and ace pitcher Mike Soroka sustained season-ending injuries within a span of fewer than two weeks this summer.

The Braves front office made up for the lost production with the in-season additions of Eddie Rosario, Joc Pederson and Jorge Soler.

The Astros roster features several playoff-tested players, but won’t include ace pitcher Lance McCullers Jr. McCullers, who injured his forearm in the ALDS, announced Monday that he won’t return to the mound.

“These guys felt we were going to get to this point,” Astros manager Dusty Baker told reporters Sunday. “It’s a matter of belief before it happens. These guys believe it.

The Astros won four of six against the Boston Red Sox to advance to the World Series. The Astros led MLB with a .267 team batting average, 863 runs scored and a .339 on-base percentage in the regular season.

Three players on the roster — Michael Brantley, Yuli Gurriel, Yordan Alvarez — have a batting average of .300 or better this postseason. Astros teammates Kyle Tucker, Jose Altuve and Alvarez are among the 18 MLB players who hit at least two home runs this postseason.

Alvarez, the ALCS MVP, is the Astros’ hottest hitter. The designated hitter has a .441 average (15 for 34), with two home runs, nine RBIs and 27 total bases in 10 games this postseason.

Tucker enters the series as one of the most dangerous hitters this postseason. The Astros outfielder has a .275 average with four homers, 15 RBIs and 25 total bases in 10 playoff games.

The Braves won four of six against the Los Angeles Dodgers in the NLCS to reach the World Series. They beat the Milwaukee Brewers in four games in the NLDS.

Rosario, the NLCS MVP, enters the series as arguably the hottest hitter in baseball. The Braves outfielder hit .560 (14 for 25), with three homers, nine RBIs and six runs scored in the NLCS. His .474 average (18 for 38) this postseason leads all active players.

“It’s just amazing how locked in he is,” Braves manager Brian Snitker said of Rosario on Saturday. “It doesn’t matter what arm they’re throwing with, he’s just so locked in.

“I don’t know that I’ve ever seen a guy like that for, this has been a long while now that he’s been doing this.”

Braves first baseman Freddie Freeman, the 2020 NL MVP, has a .294 postseason average, with three homers, six RBIs, 21 total bases and six runs scored this postseason. His 10 walks are the most among active players.

The Braves posted the fourth-best ERA (3.41) among MLB pitching staffs and lead baseball with three quality starts this postseason. Braves starters posted a 3.27 ERA in 10 playoff games. Their bullpen ranks third with a 3.56 ERA.

The Astros staff rank sixth with a 4.50 ERA. Astros starters posted a 5.92 ERA, the third-worst in MLB, through 10 postseason games. The sidelined McCullers led active starters with a 0.84 ERA in two starts.

The Astros bullpen ranks second-best this postseason, with a 3.42 ERA.

“It’s truly a great moment in my life, but I want more,” Rosario told reporters Saturday. “I want to win the World Series.”

Grounds crew members paint “World Series” on the Minute Maid Park field in Houston on Monday, a day before the opening game of the 2021 edition. Photo by Maria Lysaker/UPI | License Photo