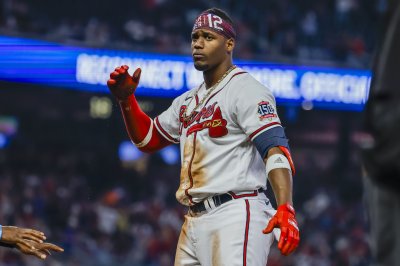 Soler, who posted a combined .223 batting average with 27 home runs and 70 RBIs for the Kansas City Royals and Braves in the regular season, was set to bat leadoff for the Braves as they looked to finish off the best-of-five NLDS. He was 1 for 11 with a double and two walks in the first three games of the series.

Without Soler in the lineup, the Braves — up 2-1 in the series — made a series of adjustments to the batting order and the outfield alignment. Guillermo Heredia replaced Soler in the starting lineup and batted eighth while manning center field.

Braves shortstop Dansby Swanson, meanwhile, was moved to the leadoff spot. With Heredia in center field, Joc Pederson shifted from left to right. Adam Duvall transitioned from center to left.

The Braves also were allowed a roster substitution due to Soler’s positive test result. The team added outfielder Cristian Pache, who can remain on the active roster until Soler is allowed to be reinstated from the COVID-19 injured list.

Also Tuesday, the Braves announced that veteran catcher Stephen Vogt won’t be available for the rest of the playoffs after having sports hernia surgery Oct. 6 in Atlanta.

Vogt is expected to be fully healed in time for spring training next year. The 36-year-old catcher played in just 26 games for the Braves after the club acquired him in a trade with the Arizona Diamondbacks in July.