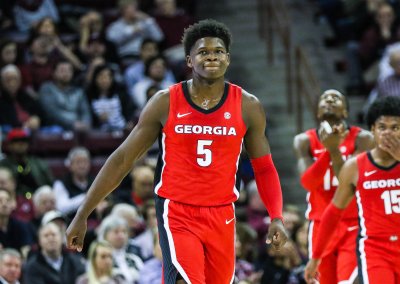 Nov. 18 (UPI) — The Minnesota Timberwolves selected Georgia star Anthony Edwards with the No. 1 overall pick in the virtual 2020 NBA Draft on Wednesday night.

Edwards, a 6-foot-5, 220-pound guard from Atlanta, joins a young Timberwolves squad led by star center Karl-Anthony Towns and point guard D’Angelo Russell. Edwards averaged 19.1 points per game and was the Southeastern Conference freshman of the year in his lone season at Georgia.

“It’s an indescribable feeling,” Edwards said. “I’m just blessed beyond measure to be in this situation.”

Memphis center James Wiseman, guard LaMelo Ball and Edwards were all, at different times, projected to be the top pick in this year’s draft, which took place five months later than it was initially scheduled due to the COVID-19 pandemic. Edwards, however, was the best positional fit for the T-Wolves and separated himself as the top pick in the days leading up to the draft.

The Golden State Warriors took Wiseman with the second-overall pick. Ball, who is the younger brother of New Orleans Pelicans guard Lonzo Ball, fell to No. 3 and went to the Charlotte Hornets.

The Chicago Bulls selected Florida State’s Patrick Williams with the No. 4 overall pick. Williams, the ACC Sixth Man of the Year last season, became the highest-drafted Seminole since Dave Cowens was taken fourth by the Boston Celtics in the 1970 draft.

After the Bulls picked Williams, the Cleveland Cavaliers took Auburn wing Isaac Okoro at No. 5. The second-team All-SEC selection averaged 12.9 points, 4.4 rebounds and two assists per game in his lone season at Auburn.

Wednesday night’s virtual draft was originally scheduled to happen in June, as it usually does, but was delayed until after the NBA finished its 2019-20 season in the bubble at the Walt Disney World Resort near Orlando, Fla.

The pandemic also forced a venue change for the draft. Instead of taking place in New York, it was held virtually at ESPN’s campus in Bristol, Conn. As usual, NBA commissioner Adam Silver announced the first-round selections, while deputy commissioner Mark Tatum did the second round.

Here is the pick-by-pick results from the 2020 NBA Draft:

© 2016 Top Daily Stories
Do NOT follow this link or you will be banned from the site!