Kathy Griffin: 'He broke me'

Kathy Griffin broke down in tears during a news conference the comedian and her lawyers held Friday to discuss the fallout from the comedian posing with a likeness of President Donald Trump’s severed head.

Griffin addressed the backlash that followed the photo being published on Tuesday, telling reporters her career is over after she says the Trump family systematically “mobilized their armies” against her.

This is the first time Griffin has spoken out since she was relieved of her duties Wednesday as CNN’s New Year’s Eve host. When asked by a reporter if she has heard from her New Year’s Eve co-host Anderson Cooper, she shook her head while holding back tears.

“It’s hurtful to me,” Griffin said. “There’s a bunch of old white guys trying to silence me and I’m just here to say that it’s wrong.”

She did not mention being dumped as Squatty Potty’s celebrity spokesperson.

Griffin, 56, said she stands by the apology she issued hours after the photo first broke Tuesday saying she “feel[s] horrible” people took the photo as a threat of violence. She said she plans to continue to make fun of the president as is her First Amendment right, her lawyer, civil rights attorney Lisa Bloom reiterated at Friday’s press conference.

“I made a horrible, horrible call,” she said. “Trust me, if I could redo the whole thing I’d have a blow up doll and no ketchup.”

The comedian confirmed she has been contacted by the Secret Service and said she fears being arrested.

The outcry against the comedian continues to grow with at least four venues announcing that they had canceled her performances. Venues in New Jersey, New York and Pennsylvania have canceled shows. The Community Arts Theater in Williamsport, Pennsylvania, posted on its website that the show had been dropped “due to the recent controversy surrounding Kathy Griffin and the concern for the safety and security of our patrons and staff.”

“The message is clear,” Bloom stated. “Criticize the president lose your job and that’s what happened to Kathy…it stops here, it stops now.”

The Associated Press contributed to this report. 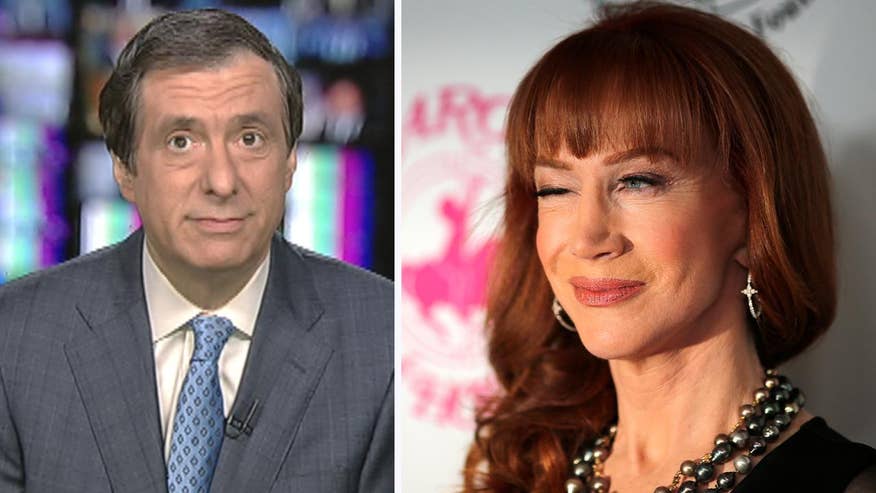 Protesters in Wuhan, China seen pushing through barrier as US senators warn against violent crackdown