The meeting comes as Trump completes his religious world trip, having already made stops in Saudi Arabia and Israel before heading to the Vatican for a March 24 meeting with Pope Francis.

While Francis and Trump have been heralded as opposites — in policy and mannerisms — they both have eschewed the traditions of the offices they respectively hold. Here’s a look at some of the more memorable occasions during Francis’ papacy.

At 76, Jorge Mario Bergoglio was elected, changing his name to Pope Francis the following day. Francis is the first Jesuit to become pope.

As the first pontiff to address Congress, Francis stressed the importance of the “Golden Rule” in terms of immigration and refugees.

“We must not be taken aback by their numbers, but rather view them as persons, seeing their faces and listening to their stories, trying to respond as best we can to their situation,” Francis said, urging a response to refugees that is “humane, just and fraternal.”

Francis also called for the abolition of the death penalty and said Congress has a “role to play” when it comes to climate change. 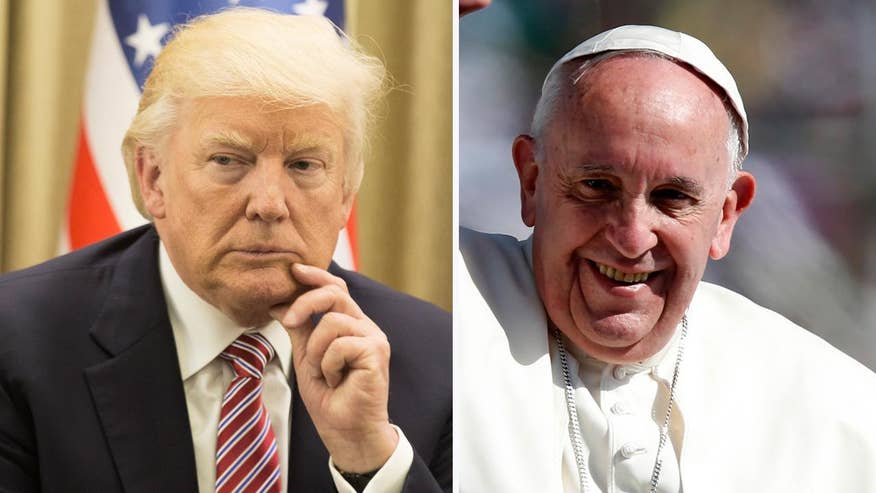 Francis escalated tensions between himself and Trump — who at the time was still just a presidential candidate.

TRUMP AND THE POPE: WILL OPPOSITES ATTRACT WHEN TWO MEET?

In response to a question about Trump’s promise to build a wall along the U.S.-Mexico border to curtail the flood of illegal immigration, Francis insinuated that anyone “who thinks only about building walls, wherever they may be, and not building bridges is not Christian.”

Francis declined to definitively say that Trump is not a Christian as he had not heard his plans for the border specifically.

“I’d just say that this man is not Christian if he said it that way,” Francis said.

Francis took three families back to Rome with him following a visit to a refugee camp in Lesbos, Greece.

“The Pope has desired to make a gesture of welcome regarding refugees, accompanying on his plane to Rome three families of refugees from Syria, 12 people in all, including six children,” the Vatican said in a statement.

The families were Muslim, according to Reuters.

Francis officially allowed priests to absolve the “grave sin” of abortion — including for doctors and nurses as well as women.

“There is no sin that God’s mercy cannot reach and wipe away when it finds a repentant heart seeking to be reconciled,” Francis said in a 10-page Apostolic Letter.

“I wish to restate as firmly as I can that abortion is a grave sin, since it puts an end to an innocent life,” the pope said.

In a letter relayed by Chicago Cardinal Blase Cupich, Francis expressed his prayers for the people in Chicago who have been made victims by the excessive violence in the city.

Francis reportedly said in the letter that he prays the victims “may experience healing and reconciliation.”

In a historic push for unity among Christians and Muslims, Francis traveled to Egypt to meet with the country’s political and religious leaders.

Francis’ trip came just weeks after a pair of suicide bomb attacks at Egyptian Coptic churches claimed the lives of at least 45 people. It was the first papal visit to Cairo in 20 years.

The trip served to bring a message of peace to Egypt, according to Cardinal Pietro Parolin, the Vatican secretary of state.